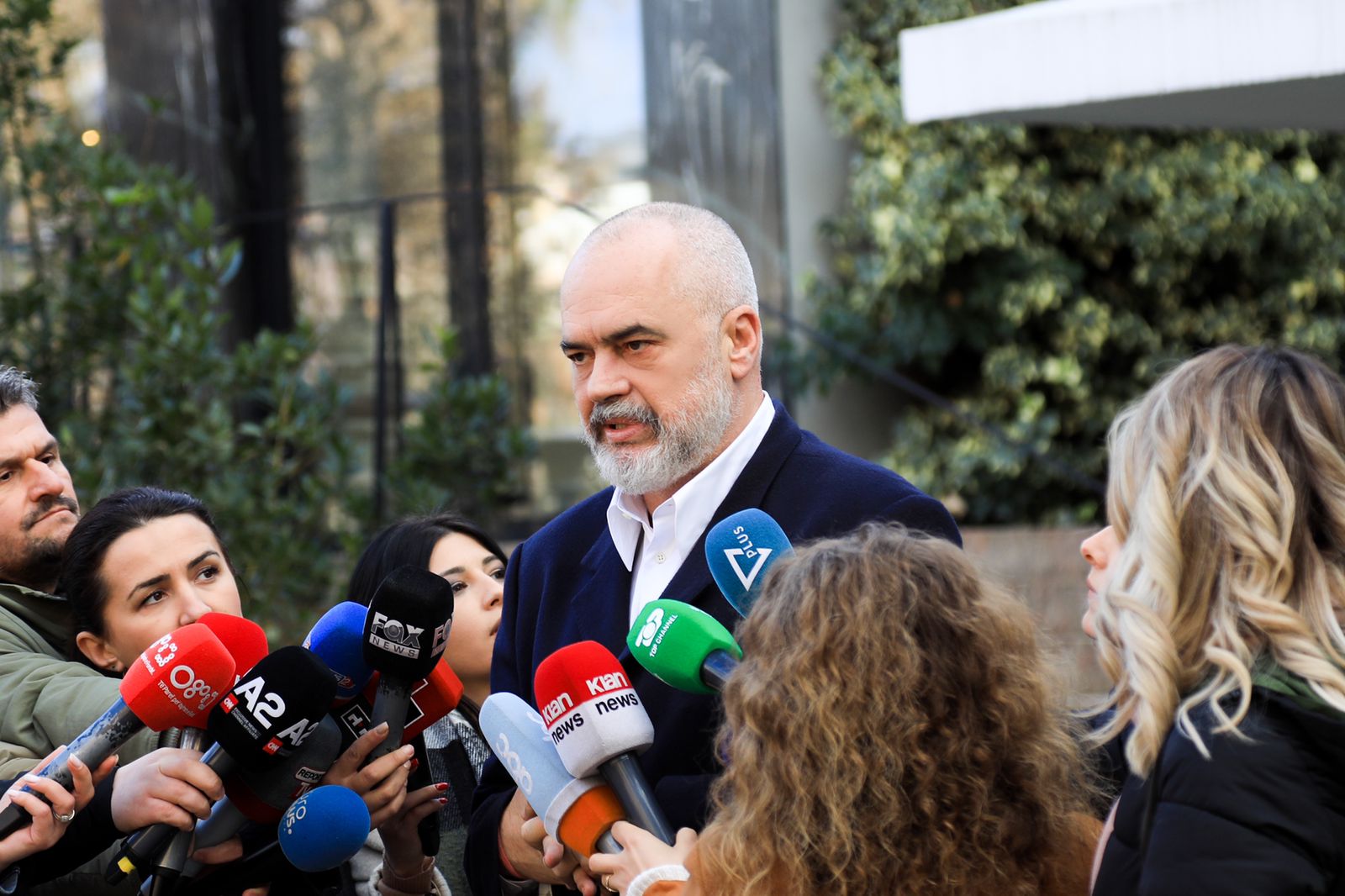 Press statement by Prime Minister Edi Rama on the new National Consultation initiative and the partial mayoral elections in six municipalities across the country:

-Did you name any candidates?

Prime Minister Edi Rama: No, we didn’t name any nominees, because the decision is the most recent. We held a meeting to discuss two main issues, namely the partial mayoral elections and the National Consultation initiative, which was officially and publicly announced a day ago.

The first questionnaires are already being distributed and they will be sent to every household and everyone will also be able to join this national consultation initiative via the digital channel, smartphones, computers and I invite everyone to join this process. It is something totally for free, it is a simple and very friendly consultation process on a number of issues, about which, as I have already stated since the very beginning we don’t lack the votes in parliament, but we also want to draw the  opinion of citizens beyond the party trenches and entire space of vilified politics, regarding issues with a direct impact on the Albanian families, with direct impact on aspects of economy, justice and security and of course important strategic aspects of the foreign policy,

-Would you backtrack from the Open Balkans if the citizens say “No” to this initiative?

Prime Minister Edi Rama: We’ll see about that! Of course, we will attach great attention to the process, because, I repeat, it is us who need to draw this opinion. So, it is not a tactical need, so to say, but a real need to gather this public opinion, so that we build a clear picture of what people really think, despite their political affiliations.

In the meantime, as far as the second issue is concerned, namely the decision on the partial elections in six municipalities, we have decided to launch preparations for this electoral process immediately. It is a process where we will certainly take part, will respect the deadlines and introduce our mayoral candidates.

– Would you backtrack from the Open Balkans if the citizens say “No” to this initiative?

Prime Minister Edi Rama: We’ll see about that! Of course, we will attach great attention to the process, because, I repeat, it is us who need to draw this opinion. So, it is not a tactical need, so to say, but a real need to gather this public opinion, so that we build a clear picture of what people really think, despite their political affiliations.

In the meantime, as far as the second issue is concerned, namely the decision on the partial elections in six municipalities, we have decided to launch preparations for this electoral process immediately. It is a process where we will certainly take part, will respect the deadlines and introduce our mayoral candidates.

–Will the candidates be mainly women and why not current MPs?

PM Edi Rama: I don’t think we will nominate any current MP as mayoral candidate in any of the six municipalities, because the MPs have been elected to play the role of the lawmakers in parliament and this is actually the opinion of all members of the party’s chairmanship. As for the female candidates, you already know that I would pick a woman instead of ten men.

PM Edi Rama: A second chance is a term usually fit for individual bilateral relations. We can give each other a second chance when we are friends and when for a reason or another our friendship is hurt. However, Socialist Party doesn’t offer a second chance to anyone who has embarrassed the party in the eyes of the citizens, by lying about a very important aspect of our public life. So, no second chance would be offered to anyone who files a false statement about life, activity, and about all the aspects that have to do with the law on moral integrity.

–In his most recent visit to Albania, Turkish President Erdogan called on the Albanian government to act immediately and take measures against the FETO organization in our country. Will you fulfil this demand from the Turkish President, given also the fact how much we owe him after what he has done for Albania?

-Mr. Prime Minister, during last year’s parliamentary elections campaign you predicted the number of seats your party was to win in parliament. Would you make a prediction on the municipalities you would win?

PM Edi Rama: We are the Socialist Party, we are the all-time champions and winners and there could be no other optional election result but the election victory, all the more so since there could be no draw in politics, but in this case this is about the mayoral elections and the communities. We won’t engage in a battle for overall win in the sense of a battle that would earn primetime TV coverage from dawn to dusk. Instead, I would personally focus on the National Consultation initiative, the Socialist Party too, while certainly working hard to win the partial elections and arrange everything to be present in the communities where the mayoral elections are set to take place. However, I don’t think it is worth making such predictions. The projections I mentioned back then were actually based on very profound scientific calculations, we normally do. We run whole machinery that makes calculations and this is something not to be understood by the so-called political commentators, who claim over alleged vote-buying practices in Albania. Vote and elections are freer and fairer than ever before in Albania.

– Will the Socialist Party seek to create political alliances in certain municipalities in order to win elections there? I mean the municipality of Shkodra.

PM Edi Rama: It is universally known that we are allied with the citizens and the National Consultation initiative represents another step to further strengthen and expand such alliance to serve people and the country, despite the vote, which means that I invite everyone to partake the National Consultation despite their political affiliations, despite who have been voting or plan to vote for. The National Consultation is not a process of registration with the Socialist Party, or affiliation with the government, but a process of interaction between a government and me, who wish to stay as close as possible to every citizen during this term in office, and stay close to the citizens who address to their government, no matter whether they have voted for it or not, and no matter whether they will be voting for this government or not in the future and in this sense we enter the partial local elections with the same spirit. So, we will urge citizens to vote for us and it is the citizens who will decide. It is not a matter of life and death, because it is about local and community elections …

– You seem to worry more about the National Consultation process than the partial mayoral elections. Do you plan to let the opposition gain an upper hand in these six municipalities?

PM Edi Rama: It is totally true that I am actually not worried, but totally committed to the National Consultation and I think more about this initiative, because it is being launched for the very first time. It is an initiative I wish would become a tradition, with the government addressing its citizens through a set of questions that require strategic answers from it and in this context this is a very first initiative and as it is always the case with the first thing, we don’t know how it will progress. However, we certainly wish to learn from such an initiative. In the meantime, although I understand everyone who is skeptical about it, I would invite them to join and not prejudice the initiative, but instead assess its results and everyone will then figure out this is the right thing to do and take part in it later. As far as the partial local elections are concerned, I already said that the Socialist Party is the undisputable winner. These are of course important elections and we will certainly seek to win the electoral process. As far as the opposition is concerned, I would decline to comment on the opposition, as I have already said whatever I had to say about the opposition. The opposition is in agony and in a lamentable situation.