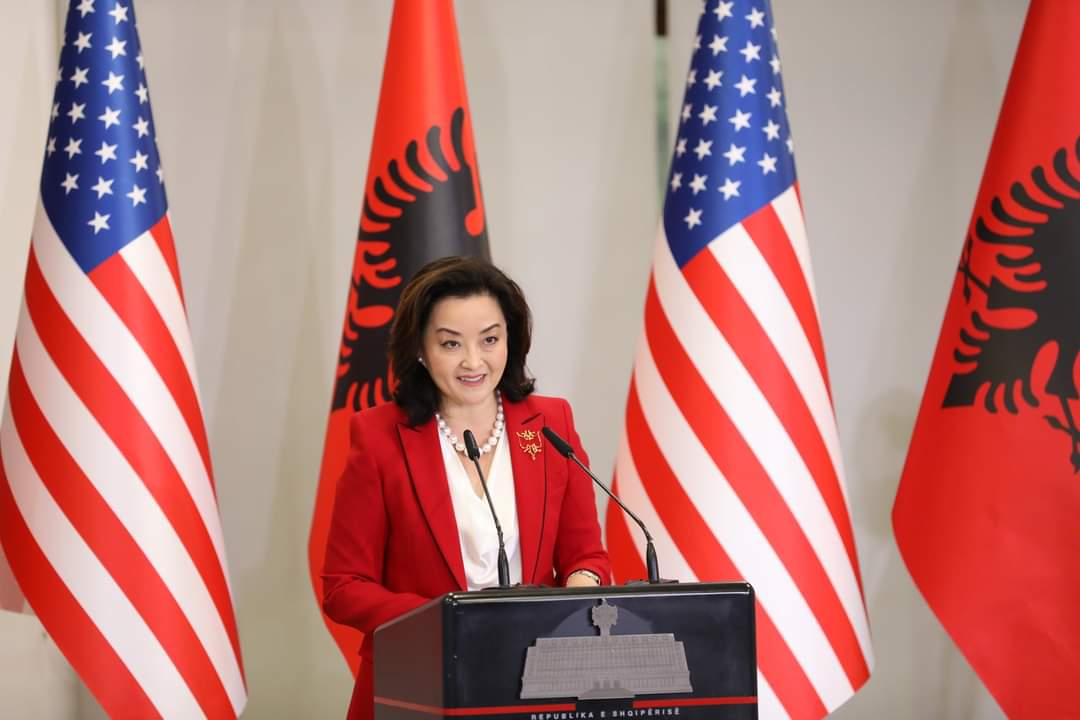 At the reception given by the Foreign Ministry on the occasion of the 30th anniversary of the establishment of US-Albania relations, the US Ambassador, Yuri Kim, in a press conference praised the bilateral cooperation after the liberation of Albania from the dictatorial regime.

Kim said that 30 years ago, Albania was seen as the "North Korea" of Europe, and today it is an unwavering ally of the United States. The American diplomat said that our country has made progress in the undertaken reforms, and while adding that it has the maximum support of the USA on the path to EU integration. She also praised the role of Albania in leading the OSCE during the difficult year of the COVID-19 pandemic.

"We mark today a very important moment, the 30th anniversary of the reestablishment of ties between the United States and Albania.

For 50 years we were kept apart. During those 50 years, though, we maintained our connection between our hearts, I think, between our people, including through the Voice of America. But on March 15, 1991 we made it formal, we made it official, and it is a great honor for me to be the Ambassador who is present for this moment. 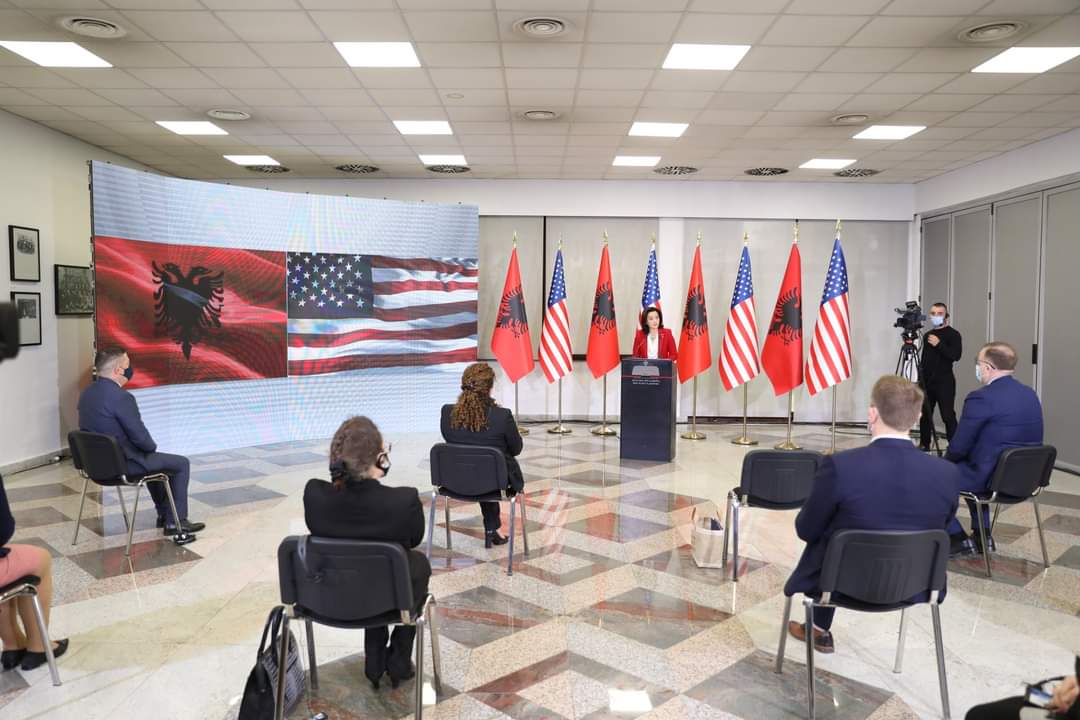 This week, we’ll have a series of events to celebrate this anniversary, but also to celebrate Albania’s progress as a democratic nation, all the reforms that you’ve made, the progress that has been made. I know that from day to day, sometimes we get lost and we forget sight of the progress that’s been made, but I think, if we compare 1991 to 2021, all of us would have to admit that tremendous positive change has taken place.

We’ve done it together.

This country used to be known once as “the North Korea of Europe.” Today, you’ve been transformed to a steadfast Ally, a partner, and a dear friend of the United States.

Thirty years ago, the people of Albania broke free from the shackles of dictatorship and communism, and the United States proudly grasped the Albanian hand that was extended, freely, and in sincerity, in friendship.Over the years, we have worked together on a range of many shared goals and priorities, including fighting corruption, strengthening the rule of law, democratization, European security, and expanding Transatlantic ties.

It is a pleasure to view the exhibition on display today – to see how we established diplomatic relations. How we re-opened our Embassy, how we supported each other through some very difficult moments. we were so pleased to welcome Albania into NATO, and we’re looking forward to the day that you are a full member of the European Union. We’re also pleased that Americans have come to Albania in many different ways, not only as diplomats, but with our Peace Corps Volunteers, who have gone to every corner of this country and have left with their hearts forever in Albania. 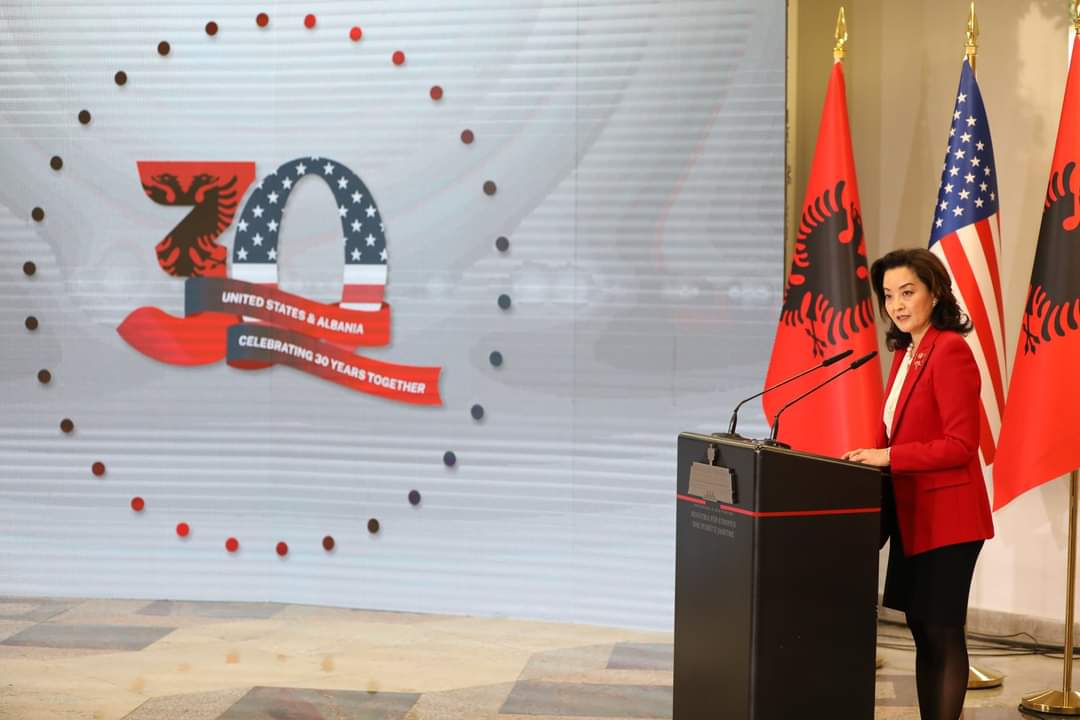 In another sign of how much progress has been made since 1991, this year, we are transforming the presence of the USAID mission here from one of classic, donor-beneficiary to one increasingly defined by partnership. Over the last 30 years, the people of the United States have provided Albania with over $1.1 billion in assistance, which we have used together to tackle challenges in democracy, defense, and business, among other issues. As part of this contribution, our USAID mission and their local partners have supported significant political and economic reforms in Albania. And we will continue to do that as partners.

Today, Albania is on the cusp of joining the European Union, and again the United States is proud to support you as you make the changes necessary for this historic effort. The EU’s decision to open accession negotiations with Albania in March last year is testament to the fundamental and significant progress that Albania has made to implement the reforms necessary for EU membership. It hasn’t been easy, but it has been necessary, and you’ve done the hard work. Albania’s EU accession will facilitate increased regional stability and political and economic connectivity in Europe and in the Transatlantic partnership. We look forward to continuing to support you and to working with you to achieve this common goal.

Our shared commitment to security is most clearly embodied in our robust partnership within the NATO alliance. We are grateful to Albania for its leadership role in promoting regional and global security through its contributions as a NATO member. We look forward to standing always krah për krah me ju for the next 30 years and beyond.

Albania has stepped up in other forums as well. Albania’s leadership last year as the OSCE Chairman in office, through the unprecedented challenges of the COVID-19 pandemic, is testament to the many contributions Albania can make on the global stage. The United States is eager to see Albania take on even more responsibility in the region and around the world.

It has been an honor for me to lead the U.S. Embassy team in Tirana these past 14 months. I have enjoyed getting to know the people of Albania, with your rich culture, your beautiful landscapes, and of course your famous hospitality.

I have no doubt that together, Albania and the United States, the Albanian people and the American people, we will continue to make progress toward our common vision, growing our vibrant bilateral relationship and our people-to-people ties. And I look forward to seeing what we can achieve together in the next 30 years. Gëzuar. Thank you very much for the celebration!" said the American Ambassador Yuri Kim.