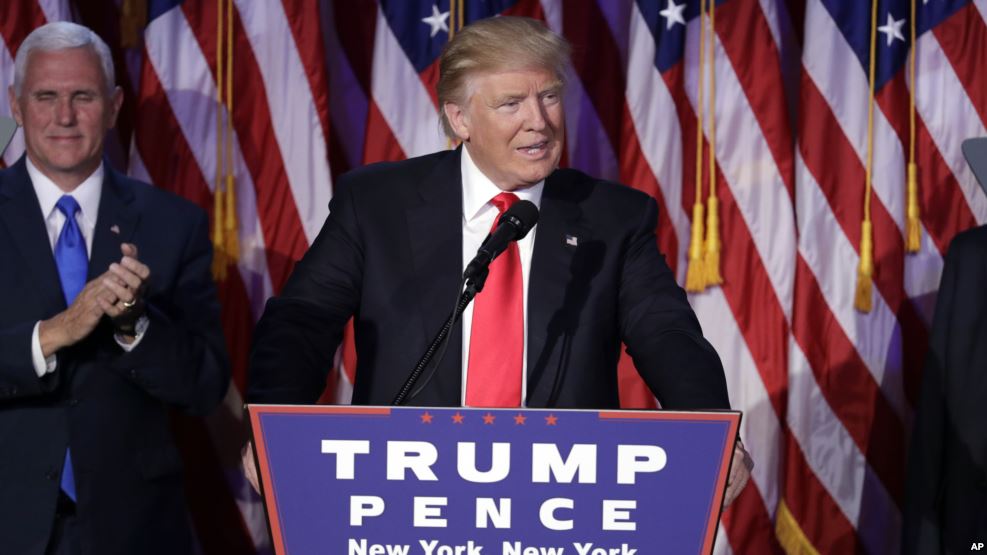 Donald Trump will be the next president of the United States

The billionaire businessman, who was widely underestimated and even mocked by the political and media class throughout his campaign, pulled off a stunning and decisive win Tuesday over his rival, ex-Secretary of State Hillary Clinton.

“I pledge to every citizen of our land to be a president for all Americans,” said an exuberant Trump, surrounded by his family and top aides at a victory party in New York City early Wednesday.

Trump, a Republican, captured at least 288 electoral votes compared with 215 for the Democrat Clinton, according to figures early Wednesday. Despite his strong electoral vote tally, Trump appeared to be headed for a narrow loss in the popular vote. It would be just the fourth time in U.S. history that the presidential winner has lost the popular vote.

At Trump headquarters, the scene was jubilant, though remnants of a divisive campaign were still evident. Even as it became clear that Trump would win, his supporters repeatedly broke out in chants of “lock her up,” referring to the Democratic nominee.

​“There was tremendous excitement among Trump supporters to begin with, and it grew and grew as results started coming in,” says Mary Alice Salinas, who was at the Trump victory party. “Many Trump supporters say they aren’t surprised at the win — they knew the polls were better for Trump than many had expected.”

Trump’s victory amounts to a massive failure for opinion polls, which showed Clinton with a seemingly safe 3-4 point lead in the final days of the campaign. Many respected pollsters had put her odds of winning at more than 90 percent.

“Clearly they blew it, and they blew it quite spectacularly,” said Irfan Nooruddin, professor of politics at Georgetown University. “The pollsters clearly have a lot of homework to do.”

Trump had for weeks shrugged off the significance of opinion polls, saying they were products of a system that was rigged against him and insisting that the size and passion of his rallies were a better indicator of public sentiment.

According to exit polls, Trump benefited from a larger than expected turnout among his base of white rural voters, many of whom feel left behind in a changing economy and were attracted to Trump’s anti-trade, anti-immigration stands.

In the end, that was enough to offset Trump’s lack of support among minorities. Exit polls show that nearly 9 in 10 African Americans and two-thirds of Hispanics voted for Clinton.

Divided party, but in control

Trump will take office with a Congress fully under Republican control, after the party Tuesday not only protected its majority in the Senate, but solidified its control of the House. That means Republicans will be able to fill vacancies on the Supreme Court, likely resulting in a shift to the right that could last a generation.

But still, the Republican Party faces massive challenges, having been largely divided over Trump’s candidacy. Over the course of his campaign, Trump has lashed out at mainstream Republicans and has rejected many aspects of traditional conservatism.

“We’re in unchartered waters now in terms of what comes next,” says Republican political strategist Ron Bonjean. “This is an unprecedented victory by an outsider who took control of the Republican Party and shook the establishment to its core and is now coming to Washington with a wrecking ball.” /voanews.com/