Peace Festival for the 2nd Annual Commemoration of the WARP Summit 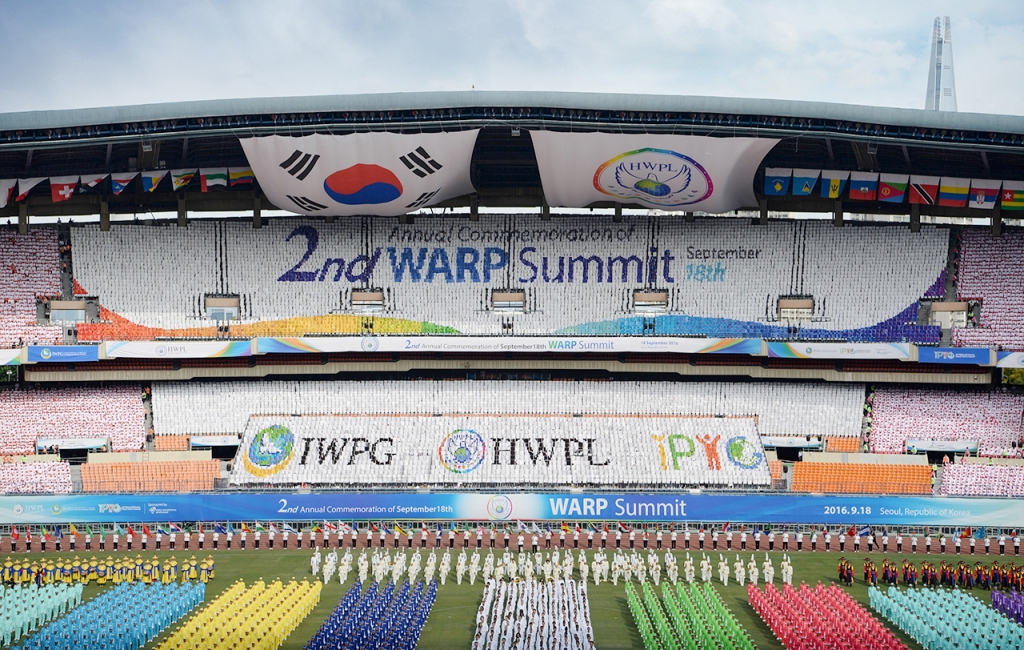 The parade, reminiscent of the Rio Olympics Closing Ceremony, proceeded with various themes, countries’ national flowers, world traditional dances, royal procession, language masks, etc. Each performer dressed in a variety of costumes and colors according to their theme, and performed various acts like going around the tracks, while the spectators stood up from their seats and danced.

In his commemorative address, Chairman Lee of HWPL said, “Here today at the Peace Festival for the 2nd Annual Commemoration of the WARP Summit, the spirits of heaven and people of the earth are gathered, as well as the eyes, ears, and hearts of the global community. Let us urge them(heads of state and religious leaders) to sign their support for the Declaration of Peace and Cessation of War and let us sign our support as well. This is the wayto love the world and all the people, like the light, rain, and air of the heavens. This is true politics and true religion; this is true love and peace.”

IWPG Chairwoman Kim said, "To speed up the advancement towards an era of peace, I propose a code of conduct to the global community. First, heads of state around the world should become one for peace and support the Declaration of Peace and Cessation of War. Second, all the religions of the world should transcend denominations and doctrines to become one for peace. Third, all women and youth of the world should join the IWPG and IPYG in promoting the Declaration of Peace and Cessation of War and urging support for the Declaration. Fourth, peace education should be implemented throughout the world," urging the involvement of all people.

The highlight of the event was the card section performance by 11,440 IPYG youth members. Their performance was the outcome of roughly 5 months of sweat-stained efforts in scorching weather combined with a genuine longing for peace that resulted in all the spectators being moved to tears.

One of the youth volunteers of the card sections, Min Ji Song, said, "Many of the card section participants were able to be gathered by their efforts for achieving peace. I hope this kind of heart can become a seed planted in the hearts of people and inspire a sincerity for pace.” She said she wants to give hope to all the people in the world who have suffered from wars and conflicts.

The performance was split into 3 scenes: the history and pain of world wars I and II, the peace activities of HWPL for the cessation of war, and the peaceful unification of the two Koreas, all seeking for peace. The IPYG card section, even from an artistic perspective, received much interest and became a trademark of the WARP Summit.

Former President of the Republic of Croatia Ivo Josipovićsaid, "The HWPL Declaration of Peace and Cessation of War and all the great peace efforts of HWPL representatives are an important contribution to the peace movement in the world. The Declaration, delivered not only to the political leaders of many countries, but to the wide public as well, has increased the awareness of the need for urgent action to stop wars and build peace around the globe.”

In addition TepVong, The Great Supreme Patriarch of the Kingdom of Cambodia delivered a congratulatory message, “I hope that the WARP Summit this year will give everyone more peace and happiness, love-kindness, compassion, tolerance, non-violence, and more strength and give more determination to live and promote peace, happiness and harmony in their daily life in their own family, society, and the world.”

The event was from the 17th~19th and all sessions took place in the Samsung Grand Intercontinental Hotel. On the 17th, Governmental, religions, law-making, and civil groups gathered in each area and participated in the advocacy forums.

On the 19th, the last day, about 1,000 guests from in and out of Korea were presented with the results of the discussions on the 17th. Even a time was agreed upon for peace to be realized through the implementation of the principles of the Declaration of Peace and Cessation of Wars. /noa.al – English Edition/

Look at all the photos