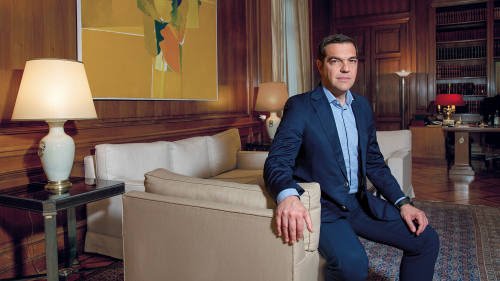 Alexis Tsipras wears a relaxed, confident, almost philosophical smile as he contemplates the prospect of Greece’s parliamentary elections, due to be held by October 20 at the latest.

Since early 2016 every opinion poll has placed Syriza, the party he leads, in second place behind the centre-right New Democracy opposition. Many polls have Syriza trailing by 10 percentage points — a gap that implies a clear-cut defeat for the prime minister and his leftist party. But Tsipras, who will turn 45 in July, is nothing if not resilient and forward-looking.

“There is a saying: if the soldier goes off to battle in order to lose, it’s better not to go to the fight . . . I wasn’t born to be prime minister. I’m not from a political family. I became the youngest prime minister in Greek history, at the age of 40.

“Life is life. In life you have to fight. This is the only thing. But the final decision is the decision of the people — it’s not ours.” 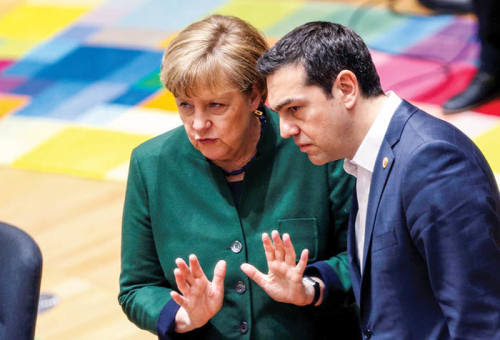 Tsipras with Angela Merkel © Reuters Tsipras came to power in January 2015 with a reputation as a political iconoclast and firebrand. By many measures Syriza was the most radical leftwing party elected to office in a European democracy since the end of the second world war. Nowadays, Greece’s allies and partners, from Brussels to Washington, are more likely to applaud Tsipras as a politician who douses fires instead of stoking them.

In no field is this truer than foreign policy. During Tsipras’s term in office, US-Greek ties have become warmer than at any time since the collapse of Greece’s 1967-74 military dictatorship. A close trilateral relationship, founded partly on common energy interests, has developed between Greece, Cyprus and Israel. European leaders began to trust Tsipras after he reversed his opposition to the terms of EU-led financial rescues for Greece and honoured fiscal commitments laid out in the nation’s third bailout, worth €86bn, agreed in July 2015.

In the eyes of the US and EU, however, Tsipras’s crowning achievement is the settlement of the name dispute between Greece and North Macedonia— a problem that had cast a shadow for 27 years over the stability of south-eastern Europe. Tsipras recalls that, on taking office, he hoped to make progress on the dispute but knew it would be hard as long as Nikola Gruevski, a rightwing nationalist, was prime minister of the state then known as the Former Yugoslav Republic of Macedonia.

If we have a normal relationship, North Macedonia could be a field for investment

“Gruevski was a guy who never wanted to negotiate,” says Tsipras. “I remember that I went to Berlin. I met Chancellor [Angela] Merkel. We discussed for a long time the economic crisis, debt, deficits, memoranda and so on. We decided to talk about external policy as well, and I said, ‘I want to solve this problem, even with Gruevski. I’ll try to provoke him by sitting him down at a table. If he doesn’t want to sit down at a table, I will accuse him [of not wanting a settlement].’

“She told me, ‘I don’t believe you.’ I asked why. She said, ‘Because all your predecessors never wanted even to open this case, especially [former premier Antonis] Samaras.’

“I don’t think Angela really believed me, but I proved that I meant what I said when developments in Skopje showed there was an opportunity.” 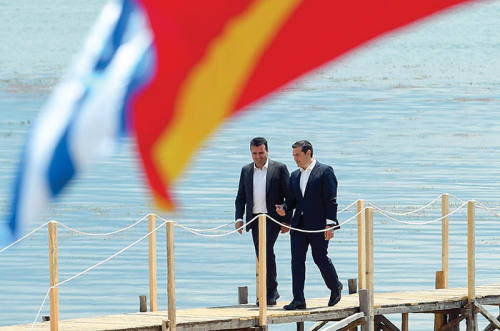 With Zoran Zaev © Getty Tsipras is referring to the end of the Gruevski era and the rise to power of Zoran Zaev, North Macedonia’s centre-left prime minister. He and Tsipras agreed the name deal that came into effect in February. Now a group of European Parliament deputies have nominated the pair for the Nobel Peace Prize, in recognition of the fact that the Balkans is known more for intractable ethnic and territorial conflicts than for problems that find a peaceful diplomatic solution.

“It seemed the only difference was the name. But it was not the name — it was our history and our identity. This made it very difficult,” Tsipras reflects. “I think it’s a balanced agreement. Nobody won his position 100 per cent . . . Just imagine, North Macedonia is a small country with 2.5m people. If we have a normal relationship, this country could be a strategic partner for Greece, a field for investment, for opening up markets.”

A logical next step would be to tackle the difficulties in Greek-Albanian relations, currently stalled after a promising dialogue opened in November 2017. Unresolved issues include maritime borders, the technical state of war that has existed between the two countries since 1945 and the status of Albania’s ethnic Greek minority.

Tsipras says he has explained to Edi Rama, Albania’s prime minister, that Tirana must better protect ethnic Greeks’ rights, or else the country’s path to EU membership will be closed. If Albania meets its human rights obligations, Tsipras says, “Greece — and I personally — will support a possible decision in June for Albania and North Macedonia to start their EU accession processes [together] . . . But we won’t endanger the accession process for North Macedonia, if it has made progress. That would be unfair.”

Tsipras emphasises that Greece does not want to earn a reputation for lecturing others, throwing its weight around or setting excessively rigid conditions for countries aspiring to EU membership. “The peoples of the Balkans need some incentive for . . . reforms. It’s like the stick and the carrot. They have to have the carrot if everything is dark.”

Looking ahead to the elections, Tsipras believes that serving his full four-year term before holding the vote in October will boost his chances at the polls as the benefits of a steady, if modest, recovery are recognised. “Every day that passes I think people understand in their lives how the situation has changed,” he says.

“Waiting is a benefit for me because sometimes there is a delay between . . . crucial decisions and [when] people recognise the changes, especially in the economy. I think that now people are starting to see the benefits of the recovery. 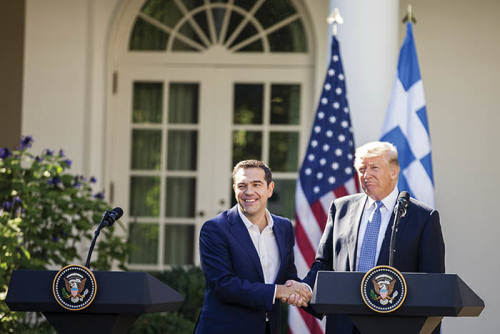 With US President Donald Trump © Bloomberg “At a time when in other eurozone countries, growth rates are decreasing, we still have growth [in gross domestic product] above 2 per cent. Our estimate [for 2019] is between 2.2 and 2.4 per cent.”

The prospect of a strong tourist season and increasing domestic demand point to the “possibility of positive surprises rather than negative ones”, over the coming months, Tsipras says.

He ticks off more figures that should reassure Greece’s creditors — the EU and the IMF — that fiscal discipline is not slipping ahead of the election: a government liquidity buffer of €45bn, a €400m outperformance on revenue targets for the first four months of this year, and a decline in unemployment to 18 per cent.

Tsipras defends his government’s record on investment, noting that 2018 brought the highest level of foreign direct investment — €3.6bn — in more than a decade. More is on the way, he says, following the successful completion on his watch of several privatisation projects launched by previous administrations.

"Sometimes it’s better to go by the book, even if this takes time, to establish an investment" For example, Cosco, the Chinese state shipping operator that acquired a two-thirds stake in Piraeus port at Athens, plans to invest €300m in building a cruise-ship terminal and other amenities. A German-led consortium, which bought a concession to operate Thessaloniki port in northern Greece, has undertaken to invest €1.1bn in modernising its facilities to create a gateway for exports from the Balkan countries.

Tsipras accepts that long drawn-out legal procedures “are sometimes an anti-incentive for investors” while arguing that patience may be needed to achieve the right outcome.

“We have to understand that sometimes it’s better to go by the book, even if this takes time, in order to establish an investment, than to try to do things without certainty and in the future find huge difficulties. Then there’s no sense in blaming legislation and the justice system, because the blame is on us,” Tsipras says.

Yet he concedes that Greece must intensify efforts to make life easier for investors. “Of course I recognise that there are still problems, that we have to [make] more reforms — and reforms are like a bicycle: if you don’t [make] them you fall down.” 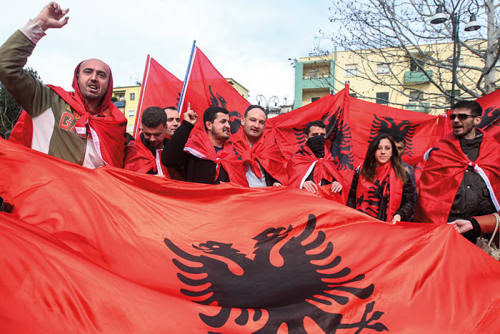