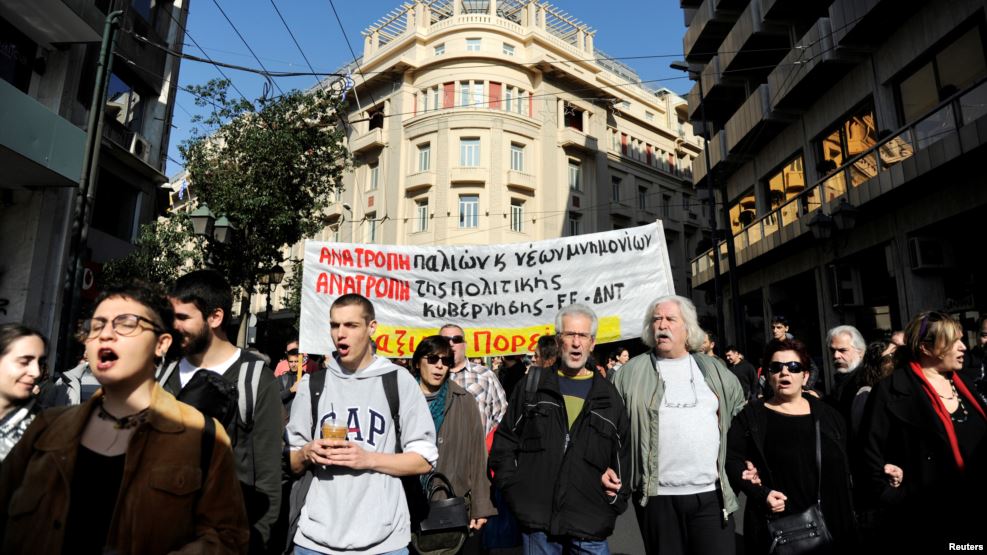 Greek public-sector workers went on strike on Thursday to protest labor and pension reforms and state asset sales which the leftist-led government agreed with the country’s official creditors in exchange for bailout loans.

"Workers and the poor are always the ones to pay the cost of the crisis," ADEDY said in a statement, VOA report.

About 3,000 striking workers and pensioners marched to parliament beating drums and chanting "Tax the rich!" They waved flags and held banners reading "Our needs above their profits" and "No more cuts!"

Turnout in rallies and street protests has been low in recent years as austerity fatigue sets in.

A parliamentary committee on Thursday started debating next year’s budget, which projects growth of 2.7 percent but raises taxes, including value-added tax, to increase revenues.

The seven-year economic crisis and an austerity-induced recession have driven thousands of people out of work and squeezed wages. ADEDY’s walkout is a prelude to a nationwide strike called by private sector union GSEE, Greece’s largest, on Dec. 8.

Athens is still at odds with its lenders — the European Union and the International Monetary Fund — over unpopular labor reforms, as part of Greece’s second bailout review.

Greece wants a swift conclusion of the assessment to qualify for more debt relief and inclusion in the ECB’s bond-buying program, which will allow it to regain market access before 2018.

However, Prime Minister Alexis Tsipras said on Wednesday Athens could not accept "irrational" demands. Other sticking points in the negotiations which hit a snag this week are fiscal targets and reforms in the energy sector.

Labor unions have strongly opposed the sale of utilities, including a stake at power company PPC.

"We think that the outcome of the transaction was satisfactory, in financial terms at least," PPC board chairman Manolis Panagiotakis told shareholders.

The deal is expected to be signed in January 2017, he said.